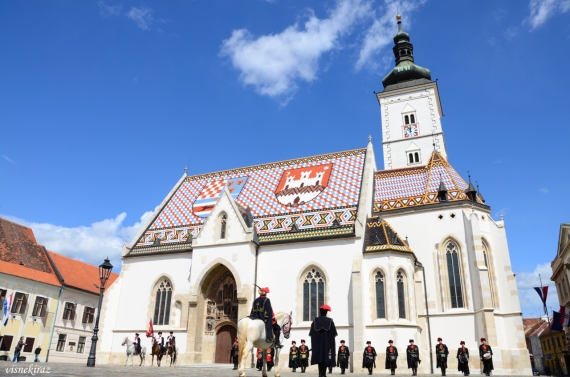 Ceremony in front of the Parliament 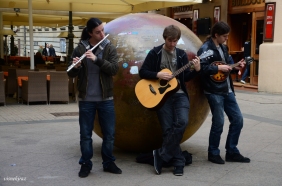 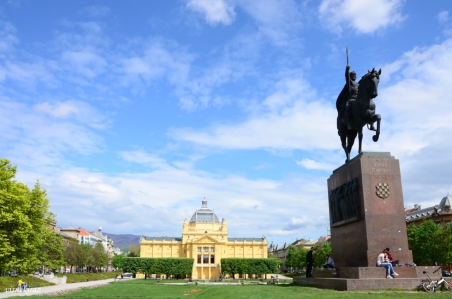 Before I went to Brazil, we had already bought plane tickets to Venice Treviso for visiting Zagreb and Ljubljana. It is 245 km from Treviso Airport to Ljubljana, and 140 km from Ljubljana to Zagreb. After we arrived to the airport via Transavia, we took a rental car and our road trip had started. My friend from Greece was in a project in Belgrade and he took a five-hour-bus journey to come to Zagreb and his trip started this way.

I always like Italy’s landscape. I remember it as soon as we landed on Treviso. While we were on the road to Zagreb, Slovenia’s landscape was amazing. Since we were coming from the west, the sunshine was on the small houses with a dark blue mountains and light green trees in the background.

Please do not forget to buy Vignette which is toll sticker for passing through highways in Slovenia.  If you do not buy it, you may have to pay 300€ for fine in random checks.

We arrived to Zagreb around 8 p.m. I stayed in Hobo Bear Hostel  which is very close to street Ilica. When you follow the Ilica Street you will arrive to main square of Zagreb called Trg Bana Josipa Jelačića. After I settled down in my room, I went out to eat some pizza. Italian food in Zagreb is very delicious. You can find many restaurants around the main square. The nights are very live In Zagreb. There are many people on the streets towards midnight. Croatians like going out at nights. The bars have seats in the streets. If the weather is good, you can chill out in also outside of the bar. I went to Alcatraz Cafe Bar  with my Turkish and Greek friends.  I liked the Croatian pop-rock music. The only thing that I did not enjoy was that smoking was allowed inside the closed places.

The new town of Zagreb was planned by a Croatian engineer Milan Lenuci in horseshoe shape in late 19th century. It is called Lenucijeva Potkova.

If you follow the horseshoe shape route, you can discover new part of Zagreb very easily in 2 hours. However, you can stay longer if you want to enjoy parks, squares, and big avenues. When we were there, it was tulip time and we took many tulip photos. You should enter to Botanic Garden while travelling through the horse shoe. It has a lovely atmosphere.

Towards the noon, we met with our friend from Croatia. I informed him about our visit. Me, my Greek friend and he attended a training in Athens in fall 2009. This was a kind of reunion. We met with his fiancée too. They have a  wedding this August. I hope I have a chance to go and take their photos. They took us and told many things about Old Town (Upper town or Gornji Gradic) in Zagreb. We watched a soldier duty change ceremony. I felt like I was in old times. Two of the soldiers were riding horses. After praying in front of Holy Mother under Blood Bridge , they walked to the Parliament building and ceremony continued there. I saw the Museum of Broken Relationships  but I did not have a time to see it. It seemed very interesting. As my friend said there  are objects which  represent all the stages of a breakup. I hope I visit it one day. We drank something in upper town. The place reminded me Notting Hill in London. There were many colourful old houses and cafes in front of them.

When we were in Zagreb, there was a market in the main square where villagers bring their own products and sell them. I saw many Turkish words like borek, tepsi that they are sign of Ottoman effect. Moreover, Turkish soap operas very popular in Croatia as well as In Greece or Syria. My friend’s fiancé asked some Turkish traditions based on her impressions while watching them. When we talked about wedding, we realised how much customs look like each other. I grabbed a piece of borek with potatoes. Yorgo tried traditional soups and bought some goat cheese.

As soon as the rain clouds arrived to Zagreb from Ljubljana, we were leaving Zagreb for Ljubljana…